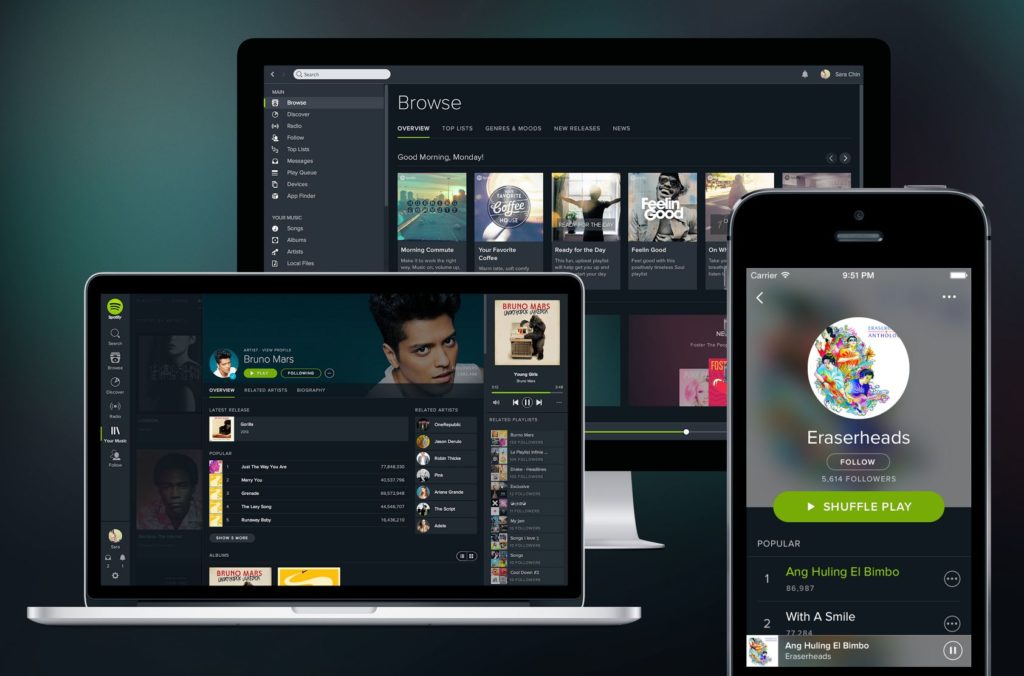 This article titled “Spotify goes public with a bang after flag snafu to mark first day of trading” was written by Dominic Rushe in New York, for The Guardian on Tuesday 3rd April 2018 16.29 UTC

Spotify, the Swedish music streaming service, went public with a bang on Tuesday as the nine-year-old company sold shares on the New York stock exchange that initially valued the loss-making company at $29.5bn.

Related: Spotify poised to be a $25bn company on eve of IPO

The initial public offering (IPO) of the world’s largest music streaming company is one of the most hotly anticipated in years and comes as other similarly loss-making tech titans are also shopping for exchanges to host their share sales.

Trading was delayed as investors struggled to find a price for Spotify, which chose the unusual route of selling existing shares directly rather than the usual IPO route. The decision led the company to predict Spotify’s shares could prove a volatile investment as buyers try to determine the company’s true worth.

The price fell $17 over the day ending at $149.01 a share, a sharp fall but still enough to ensure Spotify was one of the largest tech IPOs in history and valuing the company at $25bn.

The IPO comes at a troubled moment for tech companies. Despite astronomical valuations ahead of their share sales the recent IPOs of Snap Inc, owner of Snapchat, and Blue Apron, a meal-kit delivery service, failed to live up to their hype. Meanwhile the shares of some of tech’s biggest names, notably Facebook and Amazon, have tumbled amid fears that greater government scrutiny and regulation will dent their profits.

The Spotify sale got off to a bum note after the New York stock exchange hoisted the Swiss, not the Swedish, flag outside its historic building to celebrate the deal.

One of the first people to spot the mistake was Sven Carlsson, a Swedish tech reporter who covers Spotify for Di Digital. “Extremt mycket lol på Wall Street när NYSE hissar en schweizisk flagga,” he wrote on Twitter. For non-Swedish speakers that’s: “An extreme amount of ‘lol’ at Wall Street when the NYSE raises the Swiss flag.”

The error was corrected 15 minutes later with the NYSE raising the right flag.

The snafu marked the first day of trading in a highly unusual share sale. Spotify chose to shun the usual IPO roadshow and sell its shares directly to the market.

While this method saved the company millions in banking fees, it is also a risky move as a traditional IPO guarantees buyers and sets a price for the sale in advance.

Analysts expected the company to be valued at around $23bn but have warned that its direct listing could lead to volatile swings in its value as the market decides its future prospects.

Spotify is expected to reach 170 million listeners this year, up from the current 157 million, with paying subscribers slated to increase from 72 million to 90 million. It accounts for 40% of the global market for music sharing.

Related: Spotify’s stock market debut: all you need to know

But it is expected to report a loss of €330m ($408m) for the 2017 financial year and faces stiff competition from Apple, Google, Pandora and others.

Paul Verna, eMarketer principal analyst, was bullish on the company’s prospects. “Spotify has been the driving force in nothing less than a turnaround in the US recorded music industry. Last year the industry hit its highest revenue mark in a decade, and it was led by streaming, mostly subscription-based,” he said.

“This is a huge vindication of Spotify’s on-demand model, which has proven more popular than paid downloads. Apple’s original model, curated streaming, the Pandora model, and even streaming of live radio stations (the iHeart Music model).”

Fortunately Spotify’s execs were not present for the flag flap. Its executives declined to participate in another of the usual rituals of an IPO, ringing the opening bell.

At Spotify’s investor day in March, Spotify’s chief executive, Daniel Ek, said: “For us, going public has never been about the pomp or the circumstance of it all.”

Published via the Guardian News Feed plugin for WordPress.

We don't use first-party cookies but we have advertisements, so you can have third-party ones. We'll assume you're ok with this, but you can opt-out if you wish. Accept Read More

This website uses cookies to improve your experience while you navigate through the website. Out of these, the cookies that are categorized as necessary are stored on your browser as they are essential for the working of basic functionalities of the website. We also use third-party cookies that help us analyze and understand how you use this website. These cookies will be stored in your browser only with your consent. You also have the option to opt-out of these cookies. But opting out of some of these cookies may affect your browsing experience.
Necessario Sempre attivato

Any cookies that may not be particularly necessary for the website to function and is used specifically to collect user personal data via analytics, ads, other embedded contents are termed as non-necessary cookies. It is mandatory to procure user consent prior to running these cookies on your website.